ROME, Oct. 23 — One day a vandal, the next an artist. That is the story of the baseball-capped culprit who dumped a bottle of dye into the famed Trevi Fountain here on Friday, turning the waters blood-red for a day. 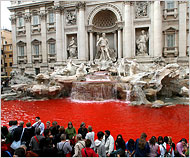 Rome’s Trevi Fountain was dyed red last Friday by a man who later said he was protesting the amount of money the city was spending on a film festival, complete with a red carpet.

Graziano Cecchini, asked if he dyed the fountain, said, “Who knows?” but added, “If it had been me, wink wink … ”

As soon as it was clear that the 18th-century Baroque fountain had not been seriously damaged, intellectuals and art critics began reconsidering the gesture as something nearing genius.

“Once the indignation had died down, we rediscovered the Fountain of Trevi,” said Roberto D’Agostino, an Italian blogger. “It’s a resurrection of Andy Warhol, the act of highlighting an object of mass consumption.”

A box found near the fountain held leaflets signed “Ftm Futurist Action 2007,” a reference to Futurism, the early 20th-century art movement that advocated a violent break with the past. The fliers said that the act was, in part, a protest of the cost of the Rome Film Fest, which runs until Saturday, and that the color referred to the event’s red carpet.

It is a lackluster festival, said a media critic, Gianluca Nicoletti, “with no depth, no color.”

“The real splash was the one made at a fountain,” he said.

Calling the dyeing a “dramatic representation of the decline of the country,” Mr. Nicoletti said, “it was a marvelous event” that put Rome in the spotlight “at practically zero cost.”

Initial reactions were of outrage and concern, and underlined how exposedItaly’s precious monuments are. Over the years, vandals have damaged dozens of statues, including the Pietà by Michelangelo in the Vatican. A 1993 bombing aimed at the Uffizi Gallery in Florence that killed five was attributed to the Mafia.

Anita Ekberg, who took a swim in the fountain for Fellini’s 1960 classic, “La Dolce Vita,” fumed in newspapers that dyeing it was “an offense to Rome’s culture.”

Photographs by tourists and a video captured a man, baseball cap pulled low, flinging the dye and hurrying off. News reports have identified him as Graziano Cecchini, a 54-year-old artist.

In a telephone interview on Tuesday, he was asked if he was the man in the photographs. “Who knows?” he answered.

“If it had been me, wink wink, I’d say that this had been a media-savvy operation in the face of a very gray society,” he said.

He said he had taken refuge in an undisclosed location with the photographer Oliviero Toscani, known for his bold, iconoclastic work for Benetton clothing.

“We see the same thing,” he said, citing a comment by Mr. Toscani about the fountain’s new color in the newspaper Corriere della Sera, “Rome that’s still menstruating, Rome that has not entered menopause yet, can still have children, is still fertile.” 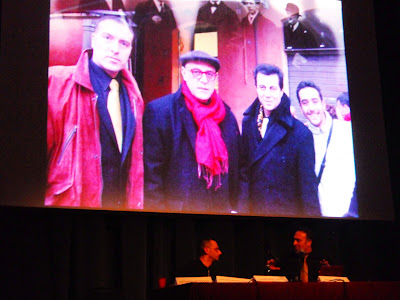 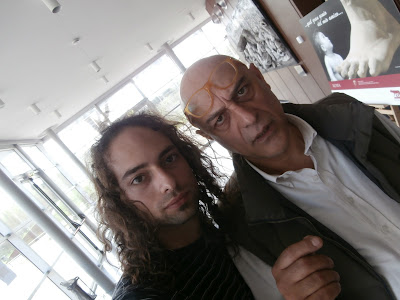 Iscriviti a questo blog per ricevere i post più recenti.